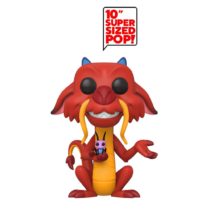 Whatcha gonna do when Funko’s new Bad Boys Pop! Vinyl Figures come for you? Jump for joy that’s what!

Released in 1995, Bad Boys stars Martin Lawrence and Will Smith as two Miami narcotics detectives, Marcus Burnett and Mike Lowrey, who are investigating $100 million of seized Mafia heroin, which was stolen from a secure police vault. It was a smash-hit that saw a sequel released in 2003, as well as another instalment, Bad Boys for Life, due for release in 2020.

Funko’s new wave of Bad Boys Pop! Vinyl Figures features both Burnett and Lowrey, as they look to unleash their unique brand of hilarity and shenanigans on your Funko collection, all while keeping order amongst your Pop! Vinyl Figures!

Add some Bad Boys to your collection today!