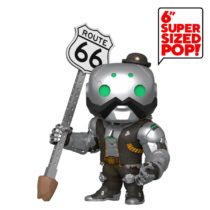 Following it’s release in May 2016, Overwatch has become one of Blizzards most successful franchises. To celebrate, Funko have just announced a brand new wave of Overwatch Pop! Vinyl Figures!

This Pop features Baptiste, who wields an assortment of experimental devices and weaponry to keep allies alive and eliminate threats under fierce conditions. A battle-hardened combat medic, he is just as capable of saving lives as he is taking out the enemy.