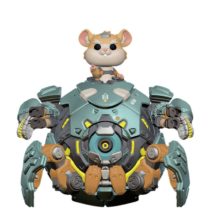 Just when you thought you’d completed your Overwatch Pop! Vinyl collection, Funko blindsides you with a brand new wave of characters to add to your team.

This wave’s team features a 6″ Bastion on damage alongside Reaper in his Wraith Form and Pharah, who’s looking pretty happy in her victory pose. D.Va and the adorable 6” Wrecking Ball have reported in for tank duty, while Brigitte and Moira are watching everyone’s backs with an impressive array of support abilities. Upgrade your team with Funko’s new wave of Overwatch Pop! Vinyl Figures today!