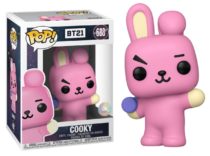 They’re cute, they’re cuddly, and now those adorable characters from BT21 series and ready to join your Funko collection.

BT21 is the first presentation from LINE Friends Creators, a project formed to create new characters for the Line Friends series. Smash-hit South Korean boy group BTS was the first artist of this project, and the main theme is to show the connection between BTS and Line Friends in terms of popularity in the world. The name is a combination of the group’s name BTS and the 21st Century.

This new wave features 7 of the characters, including Koya the blue koala who always sleeps, RJ the white alpaca who loves to eat, Shooky the savage choc-chip cookie, Mang who loves to dance, Chimmy the puppy who always has its tongue out, Tata the shape-shifting alien with a heart-shaped head and Cooky the pink bunny who loves its body “like a temple”.

Without a doubt an absolute must for any BTS fan!