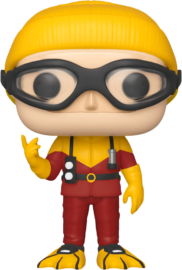 Well it seems Funko fans haven’t lost their faith either, since the Fairy Godmother Pop! Vinyl Figure has arrived to make all your dreams come true!

Released in 1950, Cinderella is the film that essentially saved Walt Disney Studios from bankruptcy. It follows the story of, you guessed it, Cinderella, who is living a less-than-perfect life after losing her parents at a young age and is now mistreated by her step mother and step sisters. In true Disney fashion, she is “rescued” from this life by Prince Charming.

However before Prince Charming fell for Cinderella, she was visited by the magical Fairy Godmother, serving as a beacon of hope by turning a pumpkin into a carriage, mice into horses, Cinderella’s horse, Major, into a coachman, and dog, Bruno, into a footman, so that Cinderella has a fancy ride for the ball.

Now for the first time, Cinderella can take said fancy ride all the way to your Funko collection as this stunning Pop! Rides features the Pumpkin Carriage, complete with mice-turned-horses who look more than proud of their newfound appearance. Be careful though, it’ll only last until midnight! We also have the beloved Fairy Godmother and Cinderella in her Pink Dress!