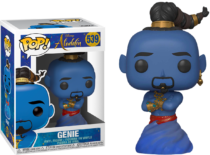 Be prepared to be taken to a “whole new world” once again with Disney’s live-action remake of their hit 1992 film Aladdin.

The film follows the story of Aladdin and his journey from regular “street rat” to Prince of Agrabah, taking down the evil Jafar in the process with the help of his pals Abu, Genie, Rajah and more. Oh and along the way he meets and falls in love with the beautiful Princess Jasmine.

This new wave features all of your favourite from the film; Aladdin himself comes wearing both his regular “street rat” attire as well as his Prince Ali suit. He’s joined by his loveable little furry pal Abu, Princess Jasmine wearing her stunning blue dress, the not-so-loveable Jafar and the always outrageous Genie, who will be played by the Fresh prince himself, Will Smith. Genie grants Aladdin three wishes after he discovers his magic lamp in the Cave of Wonders. Will Aladdin be the one to finally set Genie free?

Without question, you’ve never had a Pop! Vinyl collection like the new Aladdin series, so add them to your Funko collection today.