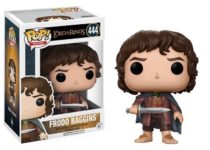 Finally, all of your favourite Hobbits and Wizards from the Lord of the Rings series have made the journey from Middle Earth and are ready to join your Funko Pop! Vinyl collection!

This Pop! features Samwise Gamgee, the sidekick of Frodo Baggins, played by Sean Astin in the film franchise. Sam is a member of the Fellowship of the Ring.