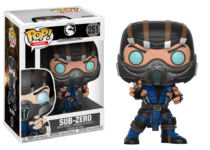 “You will learn respect!”

It’s time to test your might as Funko have returned from the Netherrealm with a new wave of Mortal Kombat X Pop! Vinyl Figures!

Mortal Kombat X was released in 2015 to high acclaim and features all of the characters and creatures from the Mortal Kombat Universe that we all know and love.

This Pop! features Princess Kitana, who is 10,000 years old, but is considered young in her realm of Edenia and has the appearance of a young woman. She is armed with her trademark steel fans that she uses to slice up her opponents.