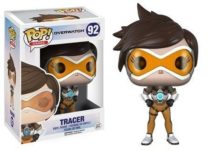 This Pop features Widowmaker, the perfect assassin who ruthlessly shows neither emotion nor remorse.