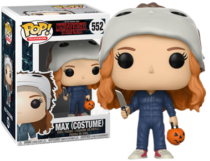 “Mornings are for coffee and contemplation..”

Now the acclaimed Netflix series Stranger Things returns for a second season this October! Celebrate by getting yourself one of Funko’s new Stranger Things Pop! Vinyl Figures!

This Pop! Vinyl Figure features the ruggedly handsome sheriff of Hawkins, Hopper, wearing his Hazmat suit from when he explored the Upside Down with Joyce to find Will.