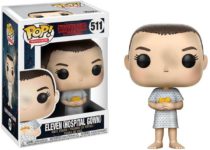 Now the acclaimed Netflix series Stranger Things returns for a second season this October! Celebrate by getting yourself one of Funko’s new Stranger Things Pop! Vinyl Figures!

This Pop! Vinyl Figure features Nancy, holding her gun which Jonathan teaches her how to use.