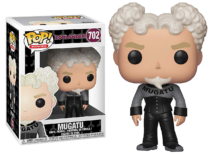 This Pop! features Derek, complete in his iconic outfit form the film and giving us his trademark “Blue Steel” pose.