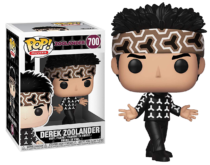 This Pop! features  the evil Mugatu, who brainwashes Zoolander in hopes of him assassinating the new progressive-leaning Prime Minister of Malaysia, allowing them to retain cheap child labour in the country.